In two short decades, Payton Allen has lived quite a life that includes recovering from multiple heart surgeries and countless other procedures.

In two short decades, Payton Allen has lived quite a life that includes recovering from multiple heart surgeries and countless other procedures.

At two days old, Payton was diagnosed with a heart murmur and Atrial Ventricular Septal Defect (AVSD), which led to her first surgery (at 3 weeks old) — a pulmonary artery banding — at Mary Bridge Children’s Hospital.

“I was in the third stage of heart failure,” Payton says. “There were a lot of unknowns, which made everything even scarier for my parents.”

At 6 months old, Payton went into surgery again, this time for Wolf Parkinson White Ablation and then again at nearly 7 months old for an open-heart surgery to fix her AVSD when her heart was merely the size of a walnut.

Caption: Payton at a follow-up appointment with Dr. Hall

Payton’s relationship didn’t end with her first surgeries — it was only the beginning of a lifelong friendship with Dr. Hall and his wife, Susie Russell Hall. Susie is a local artist who, at the time of Payton’s surgery, was doing medical illustrations for the hospital. Thanks to her, Payton’s family has drawings of Payton’s tiny, but mighty, heart.

“I knew from a young age that I would make my living from art, but it was important to use the talents I had to make the world a better place,” Susie says. “When I did medical illustrations, it helped the families understand what their child was going through. Art is healing.” 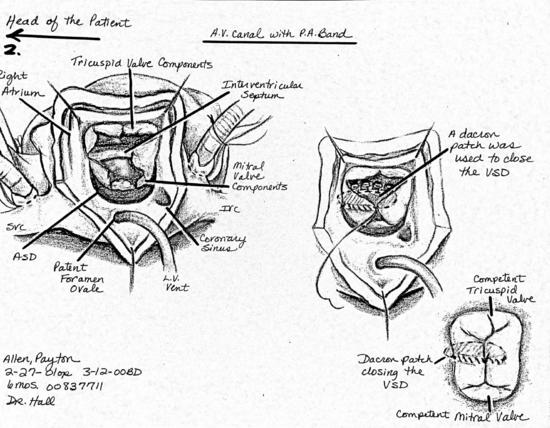 Caption: A medical illustration by Susie Russell Hall of one of Payton’s cardiac surgeries at 6 months old.

This belief in the healing power of arts led Dr. Hall and Susie to create an endowment for an art cart at Mary Bridge Children’s called “Hall’s Art for Heart” in 2006. This fund was created to ensure that the hospital always has supplies available for art to be part of the patient healing process or to serve as a distraction from medical concerns.

It was this endowment and an unforgettable experience with a patient’s mother that inspired Payton to give back.

“I originally started writing books about my experience when I was 5, and I would take them to Mary Bridge Children’s and give them to parents of kids who were hospitalized,” Payton says. “I remember very clearly there was one patient who was scheduled to have open heart surgery, and his mom was really struggling with the uncertainty of his health. I will always remember, she grabbed both of my hands and said, ‘I didn't have faith, but you just gave me hope.’”

From writing stories to raising funds, over the last 14 years Payton has raised more than $80,000 to support Dr. Hall and Susie’s art cart through read-a-thons, swim-a-thons, climb-a-thons and more through her “Our Hearts Joined Together” project.

Today, Payton is studying to be a child life specialist at Auburn University in Alabama.

“In 2019, my sister was in a very serious ATV wreck and was taken to Dallas Children’s Hospital,” Payton says. “I was going to school to become a nurse at the time, but we met a child life specialist, and I immediately knew that’s what I wanted to do with my life.”

Although Payton has lived in the south for more than half her life, Mary Bridge Children’s has never been far from her heart. Which is how, in the summer of 2021, her story came full circle. Payton was offered a practicum position at Mary Bridge Children’s Hospital as part of her child life specialist training, where she’s learning from the best and reconnecting with old friends like the Halls.

“I talk to people who think it’s weird that I keep in touch with my surgeon and his wife,” Payton says. “But they’re the reason I am alive. They're the reason why I'm in the field that I'm in. They've just always shown me that you can set your mind to anything and do it. And it doesn't matter what the statistics are. That’s the mentality of everyone at Mary Bridge, which is specifically why I wanted to come back. How could I not return to the place that taught me these values?”

If there’s a silver lining, Payton will be the first person to find it. One of her last surgeries, not too long ago, involved a titanium bar to hold up her rib cage. When that bar was removed, she made it into a bracelet inscribed with her favorite words from her favorite surgeon, Dr. Hall:

“For those with the most character, God creates the greatest challenges.”

If you’d like to support children and young adults like Payton, you can make a gift to the Mary Bridge Children’s Foundation.