Ian McClellan, 5, is a loving spirit who enjoys spending time with his older siblings and his cat, Frankie.

Ian McClellan, 5, is a loving spirit who enjoys spending time with his older siblings and his cat, Frankie. When the COVID-19 pandemic began, he and his mom, Liana, built obstacle courses throughout the house to fight impending “cabin fever.”

Then, Ian began waking up in the middle of the night screaming that his legs hurt.

“I am looking, his dad's looking and he would just scream,” Liana says. "I thought ‘Oh no he probably jumped wrong on the obstacle course and fractured his leg.’ My kids are super tough; they've always been super tough, and Ian is no exception.”

Countless clear X-rays and five days later, Ian could no longer walk because of the pain. After MRIs, PET scans and a bone biopsy, Ian was diagnosed with a rare form of leukemia and immediately began chemotherapy.

Because of his reactions to treatment, Ian spent the majority of the next six months at Mary Bridge Children’s Hospital.

“It's very overwhelming,” Liana says. “We didn't go to bed a lot because we tended to be stressed out, so we just stayed up. At night, there's just no people so you can feel more normal. We stayed up and had dance parties and midnight snacks.”

Child Life Services (and Angry Birds) to the rescue

Because of the intense pain Ian experienced before and throughout treatment, it was hard to convince Ian to move and participate in his necessary therapies. That’s when the donor-supported Child Life Services team arrived on the scene.

Every Mary Bridge Children’s child life specialist will tell you that they “get to play for a living.” But there is some truth to that saying. Take Child Life Specialist Bari Bates, for instance. She created one of Ian’s favorite therapy activities — a life-size Angry Birds game.

“Part of my job is to help figure out how we can bring play into the hospital in everyday moments,” Bari says. “Bringing to life a small (but awesome) Angry Birds course just seemed like a great fit for both play and meeting therapeutic goals.

“I collected empty Band-Aid boxes and put pictures of the Angry Bird pigs on them with some tape. Pretty immediately, Ian was standing up, balancing, bending over to pick up ‘piggies’ and ‘birds’ and laughing and yelling when he knocked them down. From then on, it became our routine for when Ian was admitted — he would get into his room, and I would have the “piggies” ready for him, keeping them safe for him in my office for when he was discharged home.” 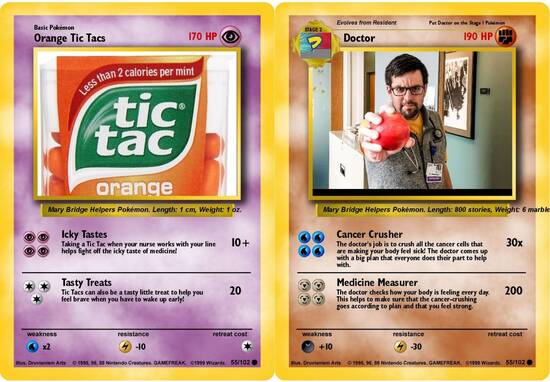 Bari also knew that Ian was very interested in Pokémon, so she created cards that corresponded with his care, like a “Snoozin’ Snorlax” card for when he would be sedated for treatment and a card for his oncologist, Jacob Henderson, MD..

“Each card was a ‘fighter card’ and a strategy against cancer to help him better understand what we were doing,” Bari says.

The medical care Ian received was top-notch, but, according to Liana, it was the “above and beyond” actions that made his experience special, like those of the pharmacists who worked with Liana when Ian suffered every side effect imaginable.

Night nurses like Kirsten Kreutz, RN, were some of Ian’s favorites, taking him on grand adventures.

“At night, Kirsten would walk him or wheel him down to the fish tank on sixth, so he could check out the fish,” Liana says “They would let us escape and just roam the hospital in the middle of the night to catch Pokémon – whatever they could do.”.

As a health care worker herself, Liana knew how costly Ian’s treatments would be and was prepared to pay whatever it took for her son to be healthy again. She was encouraged by her social worker to apply for MultiCare’s financial aid and had tears in her eyes when she received notice that a majority of his bills would be covered.

“I'm fortunate. I have a good job. I have insurance. I saw a lot of families in the hospital that I'm sure that was not the case. And Mary Bridge Children’s helps those families so much — they never deny care,” Liana says. “There's no end to how much I love them all and how wonderful they are.”

Ian finished his chemo treatments in September 2020 and returns to Mary Bridge Children’s monthly for check-ups. He’s back to being an energetic and fun-loving kid.

As is the case for any parent who goes through a medical crisis, this profoundly affected Liana. In fact, it’s transformed the way she interacts with patients at her job as an interventional radiology tech at MultiCare Tacoma General Hospital.

“It’s a completely different set of conversations that I have with people who have cancer now,” Liana says.

From sharing tips on treating mouth sores to simply holding someone’s hand and affirming them with a “yes, this sucks,” Liana has an even deeper appreciation for her patients, the care team at Mary Bridge Children’s and, most importantly, for her son.

“Ian is and was so strong,” Liana says. “He never even thought about giving up. He’d just keep trying and trying. He’s amazing.”

You can support child-centered care for kids like Ian with a gift to Mary Bridge Children’s.