In 2013, Jaida Kostick and her twin sister were born at 24 weeks in Nashville, Tennessee

In 2013, Jaida Kostick and her twin sister were born at 24 weeks in Nashville, Tennessee. They both spent nearly five months in Neonatal Intensive Care Units, and Jaida was on a ventilator for most of that time.

“In the first two months, Jaida pulled out her breathing tube 11 times, which means she had to be reintubated just as many times,” her mom Candice says. “Her airway was almost completely shut. So that's when they decided to do the tracheostomy, and she was diagnosed with subglottic stenosis (narrowing of the airway) and bronchial dysplasia (chronic lung disease).” 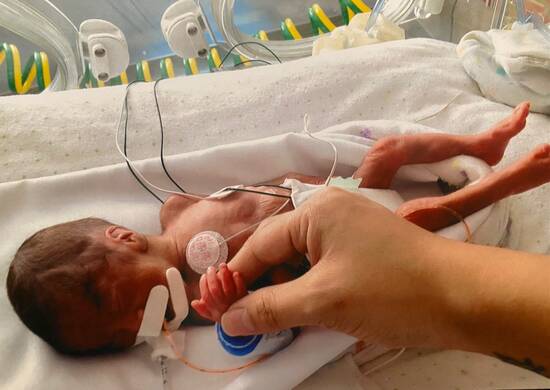 Because Jaida is part of a military family, when her family moved to Washington, she was primarily cared for at Madigan Army Medical Center. It was there that a first attempt at reconstructing her airway was performed. Unfortunately, Jaida became ill shortly after, so she had to have the trach placed again.

Today Jaida is 8 and has only known life with a trach. True to her nature, it’s never slowed her down. Jaida loves to roller skate, dance, go on hikes with her family and even does some yoga.

But trach removal has remained a goal for Jaida and her family. So, in the spring of 2021, Bryan Liming, MD at Madigan Army Medical Center and Mark Boseley, MD at Mary Bridge Children’s Hospital joined forces to make another attempt at reconstructing Jaida’s airway.

“The plan was to have the surgery, and Jaida would be on light sedation for a few days. Then, they’d wake her up and remove her breathing tube,” Candice explains. “So, we went in for the surgery on May 21, sat around probably for a good three to four hours and were told that the surgery went well. From there, it was a waiting game.”

A few days post-surgery, after Jaida had enough time to heal, they tried to remove her breathing tube. But because of fluid build up in her lungs, she aspirated, and the breathing tube had to be replaced.

“I ended up leaving the room because it was a little bit much for me,” Candice says. “It’s the longest wait ever when you're in a moment like that. Things just slow down. I remember everyone on her team being really helpful. One of the social workers came and sat with me and talked with me to keep me in a good place. Once Jaida was reintubated, it was time to come up with another plan.”

After a couple attempts, Jaida’s tube was finally removed. Her road to recovery began and included repiratory therapies like playing the harmonica.

“All of the respiratory therapists at Mary Bridge Children’s were top-notch,” Candice says. “Antonio played the harmonica with Jaida. She still plays hers at home, so I know he made an impact. Every one of those therapists saved my daughter’s life.”

The process was very challenging for Jaida. One of the ways her team, including Child Life Specialist Kelsey Mitchell, kept her motivated was to promise that if Jaida came back for her check-up, she could paint Dr. Boseley’s nails.

“Kelsey is pretty amazing — I think the whole staff was really helpful with Jaida,” Candice says. “There were times when it was hard for me to explain to Jaida what was happening and just to get her mind off of things. Kelsey was super helpful with providing tools, playing with her and giving her time to process things.”

According to Dr. Boseley, the process was a team effort that included both the medical team and Jaida’s family.

“The partnership between the family and the care team including respiratory therapists, intensive care physicians and the nurses was truly remarkable,” Dr. Boseley says. “We wouldn’t have had the same outcome without everyone’s support.”

Nearly two months out from her surgery, Jaida is taking things slow, but has achieved many milestones. This includes swimming on her own, which wasn’t possible with her trach.

And at her most recent follow-up appointment, Jaida cashed in on the offer to paint Dr. Boseley’s nails. He was a great sport, and she was all smiles.

According to Dr. Boseley, it was the best manicure he’s ever had. 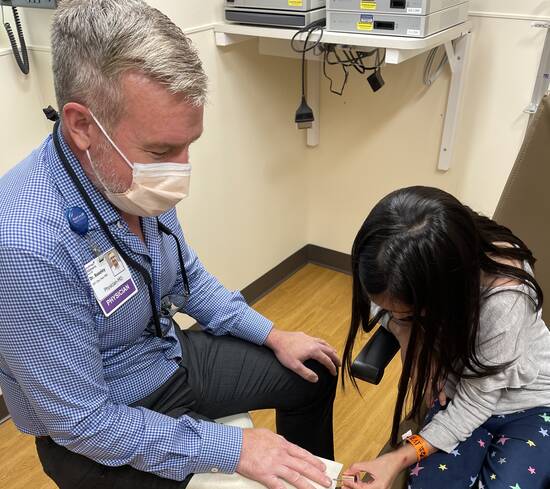 Many services offered during Jaida’s hospital stay, including Child Life, are supported by community donations. You can support young surgical patients like Jaida with a gift to the Mary Bridge Children’s Foundation.