When Caitlin Keely’s son Iann was hospitalized at 5 days old, it was one of the scariest times of her life, but she remains grateful for the lifesaving care he received at Mary Bridge Children's.

The emergency room is the last place you want to find yourself with a newborn, but that was Sean and Caitlin Keely’s reality when their son Iann was just 5 days old and refusing to nurse.

“In the back of my mind I had this ‘mom intuition,’ and I knew something was wrong,” Caitlin recalls. “I was syringe feeding him to try to get him to take in calories. On day four, I woke him up to feed him and he spit up and there was a little tinge of green. I freaked out.”

The Keelys rushed Iann to the Mary Bridge Children’s emergency department at 1am, where they explained his symptoms to two doctors. One of the doctors manipulated Iann’s stomach, which resulted in solid green spit up and increased their sense of urgency.

“All of a sudden it went from us casually talking to the doctors to one telling us what was going to be happening next while the other went into action mode — gathering other teammates, prepping him for an IV and sending him to radiology,” Caitlin explains.

Iann was admitted to Mary Bridge Children’s Hospital for nine days. After a series of tests, a biopsy confirmed that he had Hirschsprung's disease. Hirschsprung’s disease is a rare condition — fewer than 200,000 cases are reported in the U.S. every year — involving missing nerve cells in part or all of the large intestine.

Caitlin describes watching Iann being wheeled off to surgery as surreal. At a little over a week old, Iann underwent a more than five-hour surgery performed by Elizabeth Berdan, MD, and Sean Ciullo, MD, during which they removed foot-long section of diseased colon. 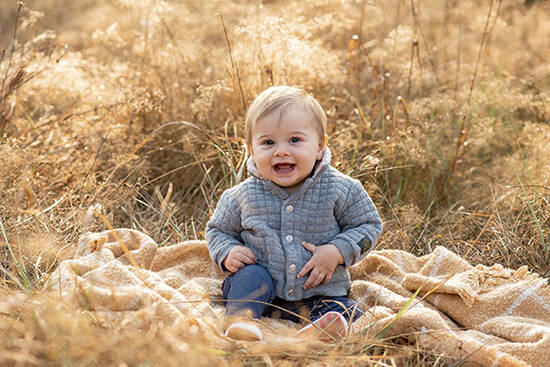 Once Iann recovered, the Keely family went home and resumed their daily life, with a few added preventative tasks to keep Iann happy and healthy, including caring for him post-surgery and monitoring him closely for enterocolitis (an inflammation in the digestive track). This is something doctors and his parents will have to watch for until Iann turns 5.

“Any kind of symptoms make me nervous because the complications from enterocolitis can be really scary,” Caitlin says. “When Iann was presenting those symptoms, I took him to the nearest emergency room.”

Because Hirschsprung's is so rare, many providers aren’t familiar with treatment or symptoms.

“As panicked as I was knowing that Iann had enterocolitis, I knew I was armed with information — thanks to Dr. Berdan and her team — that allowed me to be a great advocate for my child even when the emergency room nurse was ignoring my urgency,” Caitlin says. “I called Mary Bridge, and they immediately got in contact with this small hospital. At the insistence of Mary Bridge, we were admitted.”

Mary Bridge Children’s provided directions on what course of treatment was best for Iann and consulted on X-rays and tests. When the Keelys returned home, they saw Dr. Berdan, who assured Sean and Caitlin that they were taking great care of Iann and doing everything they could to ensure his health and safety.

"Mary Bridge is an incredibly tight-knit team,” Caitlin explains. “All the doctors are so connected to each other, and they talk about the cases they're working on, keeping everyone in the loop including us. Initially, it was a very scary time for us, but I know he was in the absolute best place he could be." With medical advancements in just the last decade, Iann has a promising future ahead.

“Thankfully, we’re out of the scary part, and I hope we never have to go back,” Caitlin says. “But if we do, I know that Mary Bridge is there for us, and they will take good care of our kiddos.”

You can support award-winning, child-centered care that empowers families like the Keelys with a gift to Mary Bridge Children’s Foundation at supportmarybridge.org.