On Christmas morning nearly seven years ago, James wasn’t feeling like his normal, energetic self.

On Christmas morning nearly seven years ago, James wasn’t feeling like his normal, energetic self.

“He'd had a really bad upper respiratory infection, just really congested and kind of yucky — but then he was dizzy,” his mom Nanette Brown explains. “So, he just wasn't very excited about Christmas, which is unusual. And then his eyes weren’t tracking together.”

The Brown family lives in Bremerton, so they took James to their local hospital. After further inspection, he was transferred by ambulance to Mary Bridge Children’s Hospital. His initial diagnosis was acute diffuse encephalomyelitis, which is a brief but intense swelling in the brain, spinal cord and occasionally the optic nerve. James was given a round of steroids, the symptoms resolved, and he went home.

Over the next couple of years, James had occasional, similar episodes of feeling dizzy and seeing double that brought him back to the familiar faces of doctors, nurses and child life specialists at Mary Bridge Children’s.

“I am really comfortable at Mary Bridge, and I really like the staff,” Nanette says. “I am a nurse, so I watch for things that maybe other people wouldn't notice. They’re just so consistent with handwashing and introducing themselves, and they keep the board updated. They’re really good at communicating and that’s really important to us.”

After a series of tests, it was determined that James’ episodes were caused by multiple sclerosis (MS). MS is a disease where the immune system eats away at the protective covering of nerves. For James, this happens most often around his optic nerve and pathway, which explains the double vision and dizziness.

The current treatment for James is medication, which means regular trips to Mary Bridge Children’s, but fewer hospital stays. When he does have to visit the hospital, donor supported services like the teen room and the pCare interactive system that allows James to watch in-room movies and virtually order food, help him and his mom feel more comfortable during their stays.

“Last time we watched Mrs. Doubtfire — that was a good one,” James says. 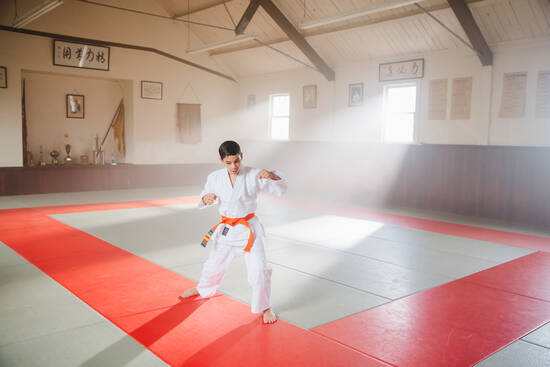 This year, James entered sixth grade, and he continues to participate in all the activities that bring him joy including karate, hip hop dancing and tricks on the trampoline.

“James never lets his MS diagnosis define him,” Nanette says. “He knows his symptoms and when he needs to get care, but for the rest of the time, he’s just the same as any other kid.”

Gifts through the Mary Bridge Children’s Foundation support family-centered care for children and youth like James. Make your gift to help kids in your community, today.